One of the first things that I did in my search for a builder was contact James Raffan and Jeremy Ward at the Canadian Canoe Museum in Peterborough.  James is the museum's director and a prolific writer on canoes, travel and the fur trade.  We had previously corresponded about his books, among other things.  Through this project we bacame good friends, to the point where he ended up joining the trip and was my canoe-mate.  Jeremy is the museum's curator as well as a well known builder - having learned the craft while working at Old Fort William.  It is he who keeps the craft alive at the museum, as well as look after the collection.  Through them, I found a builder in Northern Ontario named Tom Byers.  (For Tom's web site, click here;  for an article about him, click here.)

Tom and I spoke on the phone in June of 2008 and came to an agreement whereby he would build me a canoe, and that I would spend as much time up north with him helping.  I wanted to learn as much as I could, and also wanted to know enough to be able to maintain and repair the canoe - especially when out in the wild.

The next step was to figure out what I wanted.  The basic constraints were clear - defined by the chosen route.  I needed a boat that was suited for traveling on open water, yet not a dog when traveling on moving water.  We settled on a 17' canoe with moderate rocker, and a not too-flat bottom.  That was the starting point.  Since the beauty of the canoe is in the lines, the question then came down to specifics.  Hence, we both buried ourselves in the bible of traditional canoe craft:

What we settled on was the design used by the  Attikamekw (who Adney referred to as Tête de Boule in his book), of Québec, found on pages 109 - 110 in Adney:

Having made these decisions, the only thing left was for Tom to head out in the bush and start collecting materials - in perhaps the worst mosquito season in memory.

The canoe, which was started around the end of July 2008, and finished in early October, is shown in the photo below. 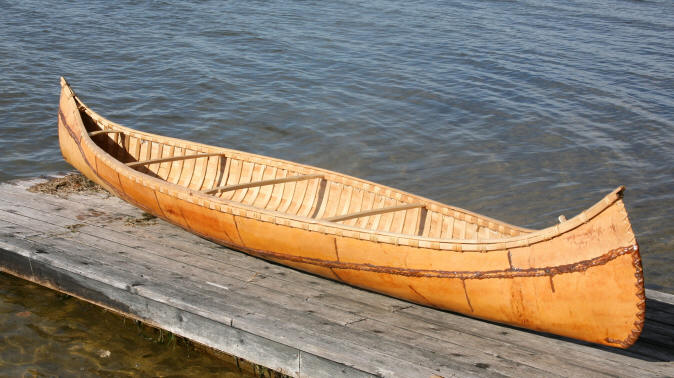 At least Insofar as I was able to do so on my three trips up to Northern Ontario to help, I tried my best to document the construction process.  The results can be accessed via the links below.

The design for the second canoe was also based on a traditional design from Adney & Chapelle (1964).  In this case, it was a Western Cree design described on pages 132-133:

This canoe was also just over 17' long.  As it turned out, two people had to drop out of the trip at the last minute, so it ended up being left at home.  Nevertheless, the reason for the design was partially that we were going to be in Cree country, and therefore liked the idea of a design from that region.  And, like the first canoe, we made it larger than the one documented in Adney & Chapelle because we wanted something that would track and manage large lakes as well as white water.

The finished canoe is shown in the following photograph:

The following pages document the building of the first canoe.  I will add to them as as I have time.  You can jump to any page by hitting the link below, or step from page to page by clicking on their "next" and "previous" links.